Deschide in romana Who we are Contact Sign-in Subscribe
Homepage Focus Readings Printed issues Authors
The Direction of Turkish Foreign Policy after Russia’s Invasion of Ukraine
While Ankara’s relations with the West have soured in recent years, its relations with Moscow have come to a more stable footing. Nonetheless, Russia’s invasion of Ukraine may cause Turkey to reassess its adversarial approach to old Western partners. 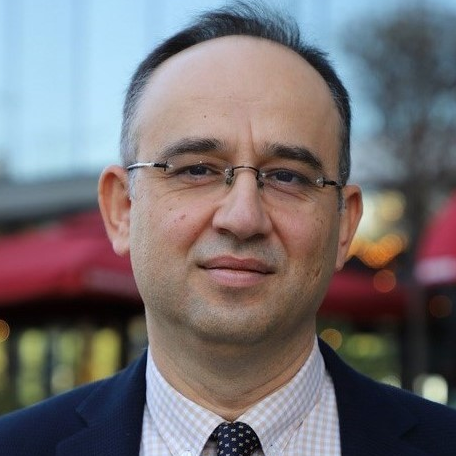 When the Soviet Union dissolved in 1991, Turkey welcomed Georgia and Ukraine as new neighbors and potential buffer states between it and its historical strategic rival in the north, Russia. Building good neighborly relations with Georgia and Ukraine while ensuring their territorial integrity were prioritized by Turkey, as doing so also worked to prevent potential conflict between these states and Russia in the future. Nevertheless, Georgia and Ukraine didn’t turn out to be the ideal buffer states that Turkey had hoped for. Since the US decision to strategically withdraw from the former Soviet space in 2008, Turkey’s regional influence in the broader Black Sea region has declined dramatically. The 2008 Russo-Georgian War and Moscow’s recognition of the two breakaway regions of Abkhazia and South Ossetia was a disappointing outcome not only for Tbilisi but also for Ankara. However, along with many leading North Atlantic Treaty Organization (NATO) members, Turkey pursued a policy of appeasement towards Russia, preferring not to risk its broader economic and strategic relations with Moscow.

In 2014, Turkey once again pursued the same appeasement policy when Russia annexed Crimea and took control of portions of Donetsk and Luhansk in Ukraine. At that time, Ankara was unwilling to sacrifice its economic interests in Russia for Ukraine. Furthermore, Turkey did not allow Ukraine and Georgia to receive naval backup from non-Black Sea NATO members to implement the 1936 Montreux Convention. Later in April 2015, the Turkish government had expected Russian President Vladimir Putin to join the centennial commemoration of the Gallipoli Campaign as a gesture of support for Turkey. Instead, Putin opted to join the centennial anniversary of the “Armenian genocide” in Yerevan, which Turkey officially describes as “the 1915 events” or “deportations during World War I”. This was a great disappointment for Turkey’s leadership, particularly as they saw themselves actively trying to improve relations with Moscow. After realizing its plans in Crimea and the Donbas region of Ukraine, Moscow decided to militarily intervene in the Syrian Civil War on the side of the Assad government in Damascus, heavily bombing opposition-controlled areas supported by Ankara. The Turkish government’s disappointment in Russia’s active military campaign in Syria became all the more palpable in November 2015 when it downed a Russian jet that violated Turkish airspace for 17 seconds. The resultant Russian-Turkish diplomatic crisis lasted seven months and ended with Turkey issuing an official apology in June 2016, which worked to halt the suffering caused by Russia’s economic sanctions.

Just as Ankara’s relations with Moscow stabilized, its relations with NATO allies were strained amid criticism of Turkey’s democratic backsliding and mass human right violations, particularly after the attempted coup in the country in July 2016. Around this time, the Turkish coalition government, consisting of the Justice and Development Party (AKP) and the Nationalist Action Party (MHP), adopted a more critical approach to Turkey’s NATO allies. Since then, Ankara has experienced separate diplomatic crises with Germany, France, the Netherlands, the United States, and Greece. Turkish leaders publicly challenged Turkey’s bid to join the European Union (EU) and even questioned its membership in NATO in 2017. Turkey’s mass human right violations and failure to abide by the rulings of the European Court of Human Rights (ECHR) also caused the Council of Europe to trigger infringement proceedings against the country in 2021.

Turkey and Russia, on the other hand, succeeded in reconciling their differences in Syria by way of the Astana Process. As a strategic decision, the AKP-MHP government purchased Russian S-400 missile systems in 2017 despite strong warnings from the United States and NATO. As the first batch of S-400 systems were delivered in 2019, Turkey was expelled from the fifth generation F-35 fighter jet consortium and subjected to light sanctions by the United States. This has become a disastrous strategic mistake for Ankara in terms of its air defense capabilities. To avoid stronger US sanctions, Ankara cannot activate or use the Russian air defense systems. Furthermore, expulsion from the F-35 consortium not only deprives Turkey from joint production incomes and technology transfer but also weakens its ability to defend its airspace, especially as Turkish F-16 fighter jets will be outdated in a few years’ time.

Turkey’s economy grows more dependent on Russia in terms of gas supply, nuclear energy (the Akkuyu nuclear power plant), tourism, and Turkish exports. When Ankara downed the Russian jet in 2015, Moscow didn’t hesitate to exploit this economic leverage, halting all Turkish imports and freezing Russian tourism to Turkey. While these sectors proved totally expendable for Russia, Turkey depends on Russia approximately for 50% of its natural gas.

Despite more coordinated relations between Ankara and Moscow since 2016, their strategic differences in the region have remained. In recent years, Ankara has been engaged in a very delicate balancing act between Moscow and Kyiv as two of its major economic partners. Ankara’s decision to sell Bayraktar TB2 drones to Kyiv and to build a joint production facility in Ukraine in 2021 has become one of the most sensitive issues in Russian-Turkish bilateral relations. In this sense, the Russian invasion of Ukraine will harm Turkey’s economic interests both in Ukraine and Russia, not least because of the West’s sanctions to Russia and the devastated Ukrainian economy. In general, the Second Karabakh War in 2020 did not harm Russian-Turkish relations, as Turkey backed Azerbaijan and Russia mediated between Azerbaijan and Armenia. Russia and Turkey’s differences in Libya also didn’t cause a major rift, even though they supported opposing parties to the conflict from 2019 to 2021.

Nevertheless, the fate of the Idlib province of Syria has remained a source of friction for both Turkey and Russia. When Moscow wants to warn or punish Ankara, it uses the “Idlib card”; it even purposedly targeted and killed at least 36 Turkish soldiers in the conflict in Idlib in February 2020. The AKP-MHP government failed to react strongly to these attacks, but it is likely that the issue will come to Ankara’s agenda in the coming years. Here, Turkey may seek an official apology and compensation for the victims’ families, much like what Turkey provided in response to the downing of the Russian jet. Still, the failure to protect Russia’s resident ambassador, Andrei Karlov, from assassination in December 2016 will remain an international embarrassment for Turkey.

These continued differences with Russia have prompted the AKP-MHP government to normalize its bilateral relations with EU and NATO members. However, Turkey’s democratic backsliding and deeply polarized domestic political arena have prevented Ankara from developing full-fledged strategic relations with Western capitals, instead pushing it to engage in shallow tactical and ad hoc cooperation. It is not clear how Russia’s occupation of Ukraine will change stalled and restricted cooperation between Turkey and other NATO members. However, it is clear that Moscow unintentionally breathed new life into NATO by invading Ukraine.

A Return to Cold War Balances?

When the Black Sea Economic Cooperation (BSEC) came into existence as a regional political and economic initiative with the signing of the Istanbul Summit Declaration in June 1992, Ankara had hoped that Turkey and Russia could lead a more peaceful and cooperative region following the dissolution of the Soviet Union. The BSEC still exists as an inactive organization, but Ankara’s initial hopes of a common regional vision have faded after three decades of political and economic engagement with Russia. Even further, Russia’s invasion of Ukraine will likely cause Turkey to perceive Russia as a threat for the first time since the end of the Cold War. From now on, it is likely that Ankara will prioritize balancing Russia rather than deepening its economic partnership with the country.

*Dr. Selcuk Colakoglu is the Founding Director of the Turkish Center for Asia Pacific Studies and a faculty member of the Globalisation and Development Programme at BNU-HKBU United International College.

The article was first published on the 1st of March 2022, at www.fenikspolitik.org.