Deschide in romana Who we are Contact Sign-in Subscribe
Homepage Latest readings Readings Printed issues Authors
Interview with Valentin Lazea, Chief Economist at the National Bank of Romania: “The Biggest Mistake Would Be to Consider That This Pandemic is a Singular Happening”
The COVID-19 pandemic has brought new challenges, which call for a new reflection on the healthy development of various economic sectors. After the pandemic, the prospects for an economic and social crisis compel the countries affected by it to take actions with a powerful impact on society. 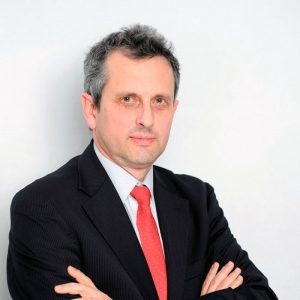 In the interview he gave to Vladimir Adrian Costea for the Geostrategic Pulse Magazine, Valentin Lazea, Chief economist at the National Bank of Romania, analysed the prospects and challenges regarding the recovery of the economy after the pandemic is over.

Vladimir-Adrian Costea: We are in the middle of a reflection process regarding the post-pandemic perspectives; how do you see the future of the Romanian economy? What are the scenarios for the emergence of an economic and social crisis caused by the COVID-19 pandemic?

Valentin Lazea: It would have been better if the pandemic had started a reflection process, however, unfortunately this did not happen – neither in Romania, nor anywhere else in the world. Everybody is convinced that things were well the way they were, and the sooner they return to the status quo before the pandemic, the better. Nonetheless, a reflection process would (at least) have led to the following conclusions:

- The growth model before 2020 was profoundly unsustainable, both ecologically (it consumed more resources than the Earth provided), as well as with regard to the increase of private and government debts. Both features entail the unnecessary burdening of future generations (so we can live beyond our means) in the hope that technological progress will solve these problems on its own and on a long term.

- The current global economic model presumes that between a healthy life (for ourselves, for our children and grandchildren) and a life of plenty, most people would choose a life of plenty. This pandemic at least should have changed this conviction, but it seems that it has not. Specifically, the current economic model, which produces goods both unnecessary (made to look “useful” by publicity, marketing and the finance and banking industry) and with a short life span (in order to enable mass production) is valued more than the model addressing the basic needs and the production of durable goods. In addition, the media promotes opulence and status as the ultimate success in life.

- Sound principles that proved their validity for centuries were discarded by economists (not to mention politicians and the public). Among these: 1) resources are limited and have an opportunity cost (if I buy a bicycle I cannot buy a TV; if I excessively increase wages, I don’t have money to invest etc.); 2) there is no such thing as a free lunch (whatever I consume and do not pay for, someone else – the taxpayers, the bank, my descendants – will have to); 3) whatever powerful/disciplined/rich countries (with currency making international reserves) are allowed to do, weak/undisciplined/poor countries (which do not have international reserves) are not allowed to; 4) in a market economy, the state is bound to save the life of every citizen, but it is not obliged to save every private enterprise.

Besides these issues, yet unsolved on a global level, Romania has some extra particular issues:

- The society is yet to decide whether it wants a welfare state (with public services just like in the EU, which would entail budget expenses of about 45% of the GDP), or a minimal state, with taxes as low as possible (just like in the USA, which entails budget revenues of under 30% of the GDP). Since it wants both – and political parties of every orientation promote the illusion that such a thing is possible – we have the result of high budget deficits, which we do not have the political will to balance without foreign intervention.

- The lack of separation between the finances of the business and the finances of the individual owner of the business made it possible, over the past 30 years, for businesses to register capital loss equal to over 30 million Euro (money that the shareholders took home, instead of meeting the minimum capitalisation requirements stipulated by Law 31/1990); however, in the current crisis situation, the same shareholders refuse to recapitalise the businesses by bringing money from home, and expect to receive help from the state budget (from us all). In other words, the privatization of gains and the socialization of losses.

Unless these subjects (and others, equally important) are debated openly, we will only have repeated upsurges and downfalls, but under more and more restrictive material and financial conditions. The biggest mistake would be to consider that this pandemic is a singular happening that will not recur in this century, so that we could use all the ammunition we have in the fight against it. It is more likely that, for the next decades we will witness recurrent hybrid warfare episodes (cyber, viral, climate) making humanity in general (and Romania in particular) redefine its relationship with the environment and the economy.

What should Romania do in order to mitigate the effects of the economic and social crisis? What are the main measures of economic recovery that you see reliable in the current context?

The crisis caused by the pandemic incidentally favours the sectors that are more ecologically sustainable and where Romania is better equipped than other EU countries: organic agriculture, renewable energy sources, IT. Similarly, the crisis puts at a disadvantage sectors that are not ecologically sustainable: mass tourism, travels by plane, shopping, restaurants etc. It is as if God is making us see what we have been refusing to see for so long.

Beyond this, any strategy of economic development should address the sectors that contribute to the increase of the potential GDP: capital, workforce, productivity.

Specifically, the development of the “capital” factor should take into account a better absorption of EU funds, increased attraction of remittances from the Romanians working abroad, a predictable fiscal and legal framework, the development of the Stock Exchange. The development of the “workforce” factor implies reforming the educational and health systems, extending the active age, attracting qualified immigrants, attracting nationals working abroad. The development of the “productivity” factor takes into account the road and railway infrastructures, increasing the energy efficiency, developing the irrigation system, stimulating research and innovation etc. However, all these require funds and, as such, a precondition for their achievement is the budget revenues NOT TO BE depleted through measures that have nothing to do with labour productivity, faster increases of pensions than of wages (financed through Social Security Contributions), continuous tax cuts and countless write-offs and exemptions. The reality shows that in Romania elections are won by those who promise high pay raises (not the increase of energy efficiency), larger pensions (not stimulating research and innovation) and tax cuts. The society as a whole is responsible for choosing a wrong economic model (out of ignorance, poverty or dishonesty), and the political parties encourage this state of affairs that suits them electorally.

To what extent do austerity policies represent a solution for Romania currently?

If we are to take into account the principles 1), 2) and 3) from the answer to the first question, we should also acknowledge the fact that the Romanian society has lived well beyond its means, between 2015 and 2019. This did not seem to be a problem as long as the global economy was good, the cash flow was abundant and a country such as Romania was financed (at a quite hefty price). Under the circumstances of the pandemic, none of these premises applies anymore and significant budgetary adjustments will be needed. If it is not done by us, willingly (and we will not do it), the international organisations (the IMF, the WB and the EU) will force it on us. If they will not do it in their turn, the markets will – with brutality. Then, what does “austerity” mean? Bringing back the wages of the state employees to the level of productivity? Bringing back the pensions increase below that of wages? Ceasing to drill holes in the Fiscal Code by countless write-offs and exemptions? All these can be labelled as “normality”, even though not many are comfortable with it.

On a European level, what are the prospects for the economic development gap between Western economies and emerging economies?

The prospects for the continuing convergence between the Eastern and the Western blocs of the EU remain as valid as ever, especially for the financially disciplined countries (such as Bulgaria and the Czech Republic). The reason for this is the fact that the rich countries in the West (with GDP per capita of over 40,000 Euro at Purchasing Power Parity) find it more difficult to increase their GDP with more than 2% a year, even in the best of times, as they are closer to the Production Possibilities Frontier (big earnings have already been obtained). For countries in the East, with GDP per capita below 30,000 Euro at Purchasing Power Parity, an increase of 3-4% is possible, if they stick to the investment sectors mentioned in the second answer and if the budgetary funds are not wasted on electoral and populist actions (a big IF, admittedly).

An insufficiently underscored aspect is that states, which instead of financial and structural reforms prefer the expediency of cheap financing by having central banks purchase government bonds (just like the Central European Bank does) become more fragile on a long and medium term: they cannot survive without the “drug” administered by the central bank. It is a danger lurking over many countries, especially over the countries in Southeast Europe, whose fragility will be exposed every time a new crisis occurs. Even more reason for Romania to resist the convenient temptation to have the public debt monetised by the National Bank of Romania, even if we have the tendency to mimic all the bad things from the experience of others.

The above opinions are personal and do not in any way involve the National Bank of Romania.